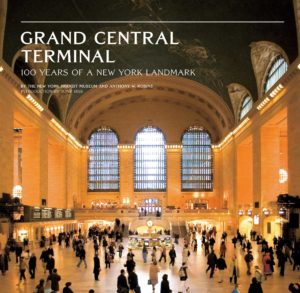 Virtual tour of Grand Central Terminal for Architectural Digest – I’m joined in the narration by Sam Roberts, author of the other book celebrating Grand Central (this is a 20-minute video)

Interview (excerpt) with Michael Gargiulo of WNBC-TV (for the full program, click here)

On February 1, 2013, one century to the day since it first opened its doors to an enthusiastic public, Grand Central Terminal celebrates its 100th birthday. In the coming months, the New York Transit Museum will mark the occasion with panel discussions, multi-media exhibits, concerts, art exhibitions, poetry readings, a new book—Grand Central Terminal: One Hundred Years of a New York Landmark—and, of course, a “Parade of Historic Trains.”

The centennial finds Grand Central in perhaps the best shape of its long history. Following a lengthy battle to protect the Terminal from disfigurement or demolition, an enormously ambitious restoration has brought the complex back to its original Beaux-Arts splendor.

The grand, formal composition, including the terminal’s axial placement astride Park Avenue; the vast and airy spaces; the heroic statuary atop the Tiffany clock; the luxuriant sculptural ornament based on acorns and oak leaves — these are the wonders that we all admire. But equally Victorian are the marvels of engineering, planning, and finance: the electrification of the trains; the train yard sunk below a newly created stretch of Park Avenue; the innovations in circulation, including the first extensive use of gently sloping ramps to route passengers; and the brilliant realization of the real estate potential of 16 brand-new blocks of Midtown Manhattan.

Grand Central is more than just a train station—it is the lynchpin of Terminal City, an entirely new section of town that rose in the same years above the terminal’s train yards and tracks, supported by steel girders beneath Park Avenue. In architectural design, the Terminal City buildings were all of a piece, either designed by Warren & Wetmore or designed by other architects with their approval. Most have been replaced with post–World War II office towers, but several survive, notably a largely intact grouping along Vanderbilt Avenue, including the Yale Club and the Roosevelt Hotel.

A team of uneasy rivals created the terminal. Engineer William Wilgus masterminded the electrification and the real estate deal (and bequeathed New York City the term “air rights”). Wilgus’s preferred architects, Reed & Stem, experienced railroad station planners, created the circulation patterns for passengers inside the terminal and automobiles outside on elevated platforms. And architects Warren & Wetmore, unexpectedly brought in at the last moment, draped the entire creation in the latest French fashions.

Whitney Warren, trained at the École des Beaux-Arts, copied no particular French prototype, but did model the Main Concourse’s grand staircase on the equally grand staircase at the Paris Opera, while deliberately recreating Paris’s Alexander III Bridge in the Pershing Square Viaduct that lifts Park Avenue traffic over 42nd Street. Then he brought in French talent to handle the ornamental flourishes—Jules-Félix Coutan for the huge statuary group of Mercury flanked by Hercules and Minerva, Sylvain Salières for the sculptural encrustation inside and out, and Paul-César Helleu—better known as a portraitist of socially prominent young women—to sketch out the starry sky on the ceiling of the Main Concourse.

As Grand Central embarks on its second century, supporters of historic preservation can take pride in the knowledge that this beautifully restored monument will continue to anchor the center of New York City into the foreseeable future.