SUBWAY STYLE: 100 Years of Architecture & Design in the New York City Subway (Stewart, Tabori & Chang, 2004) – Celebrating the 100th anniversary of the opening of the IRT 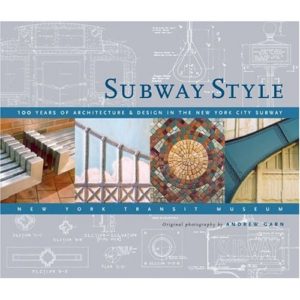 A lot of the subway system has been designated by the NYC Landmarks Commission (LPC) and/or listed on the National Register of Historic Places (NR). The LPC reports and NR nominations are available on-line.

Here are links to the NR nominations for the stations visited on the tour:

www.nycsubway.org is an amazing site – vast amounts of information on the subway system.

In particular, the site reproduces many early articles on the IRT: http://www.nycsubway.org/irtsubway.html

And this subsection of the site is devoted to the City Hall station: http://www.nycsubway.org/perl/stations?5:979

For early photos of the original above-ground kiosks (of which there is a recent reproduction at Astor Place):http://www.nycsubway.org/articles/kiosks.html

More on the Marine Grill murals by Frederick Dana Marsh, originally at the McAlpin Hotel, which were rescued and installed at the Fulton Street station: http://www.nycsubway.org/perl/artwork_show?22