For New York boomers, there are only two kinds of World’s Fair: the 1964 fair that we got to visit in our youth, and the 1939 fair that we ardently wish we could have visited – the fair of the Unisphere, and the fair of the Trylon and Perisphere.  This year marks both the 50th anniversary of the ’64 fair, and the 75th anniversary of its ’39 predecessor. To honor the memory of both, the gallery in the Central Park Arsenal has mounted a small but fascinating show of photos and objects from each of them.

The selections from the department’s Photo Archive includes images never before exhibited, anywhere. According to the department, “The photos illustrate the gargantuan task of assembling these temporary empires highlighting international and cutting-edge industry, commerce, art and design.  The striking images capture the big picture in all its grandeur, as well as private moments that reclaim the experience of visitors.  They illustrate advances in art and architecture, as well as the carnival and corporate atmosphere that at times undercut the more high-minded objectives of fair organizers.” [The 1964 Fair: View from the Observation Deck of the New York State Pavillion.]

Besides the wonderful photos, the exhibit includes brochures, guides, and letters from starry-eyed visitors, like this one from sci-fi legend Isaac Asimov who wrote: “The New York World’s Fair in 1939 was (for me) Coney Island, and Disneytown, and Heaven all rolled into one…”

Jonathan Kuhn, Director of Art and Antiquities for the Parks Department, co-curated the show with the department’s Public Art Co-ordinator, Jennifer Lantzas. 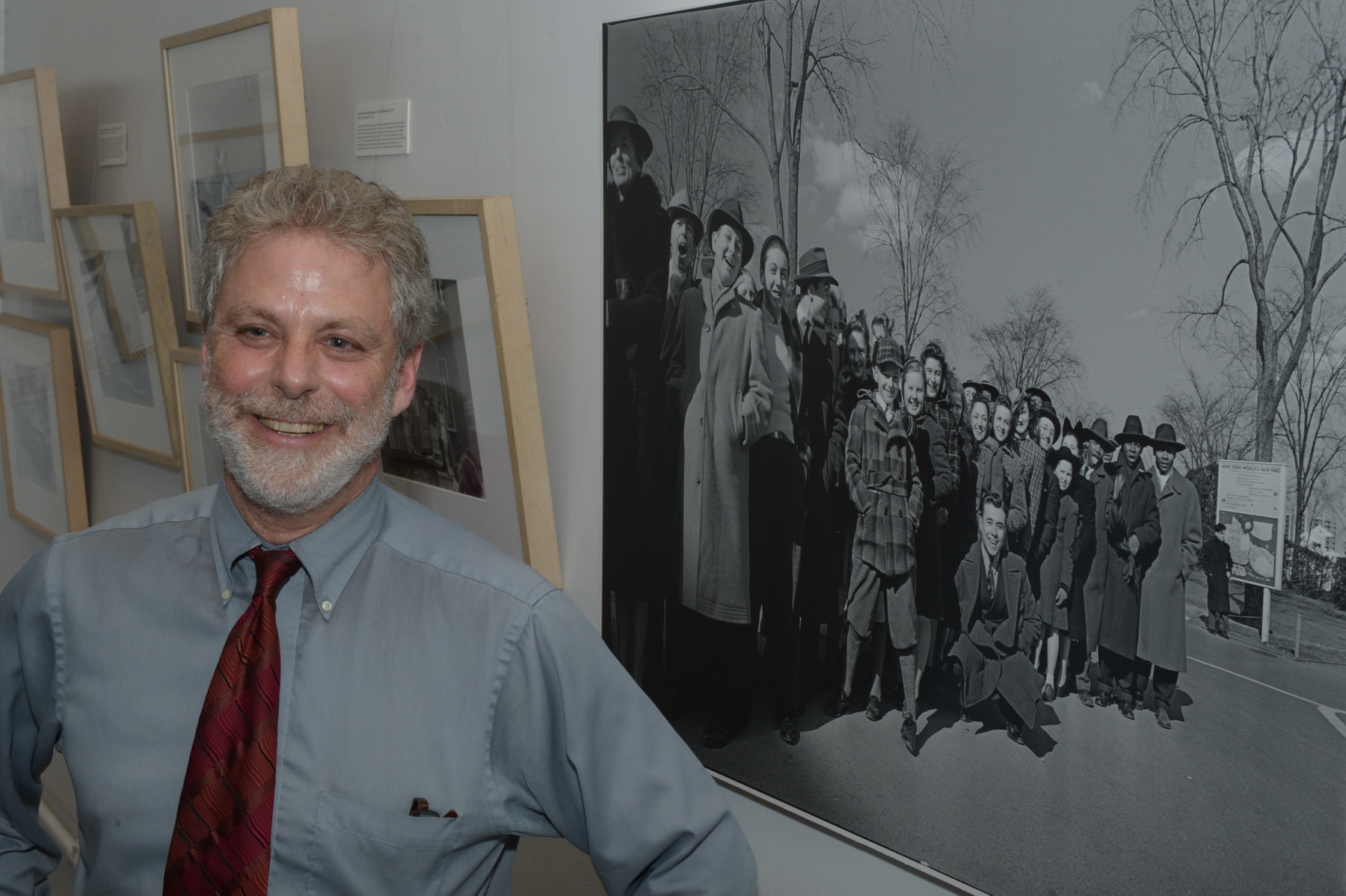 He visited the 1964 fair twice, at the tender age of six. ” I remember very long lines, the Belgian waffles, and I certainly remember ‘It’s a Small World After All’ and also the Sinclair Exhibit where you got a Sinclair molded dinasour, made while you watched. My wife held onto her small 45-rpm record of ‘It’s a Small World’ – I’ve sneaked it into the exhibition in the memorabilia case.” 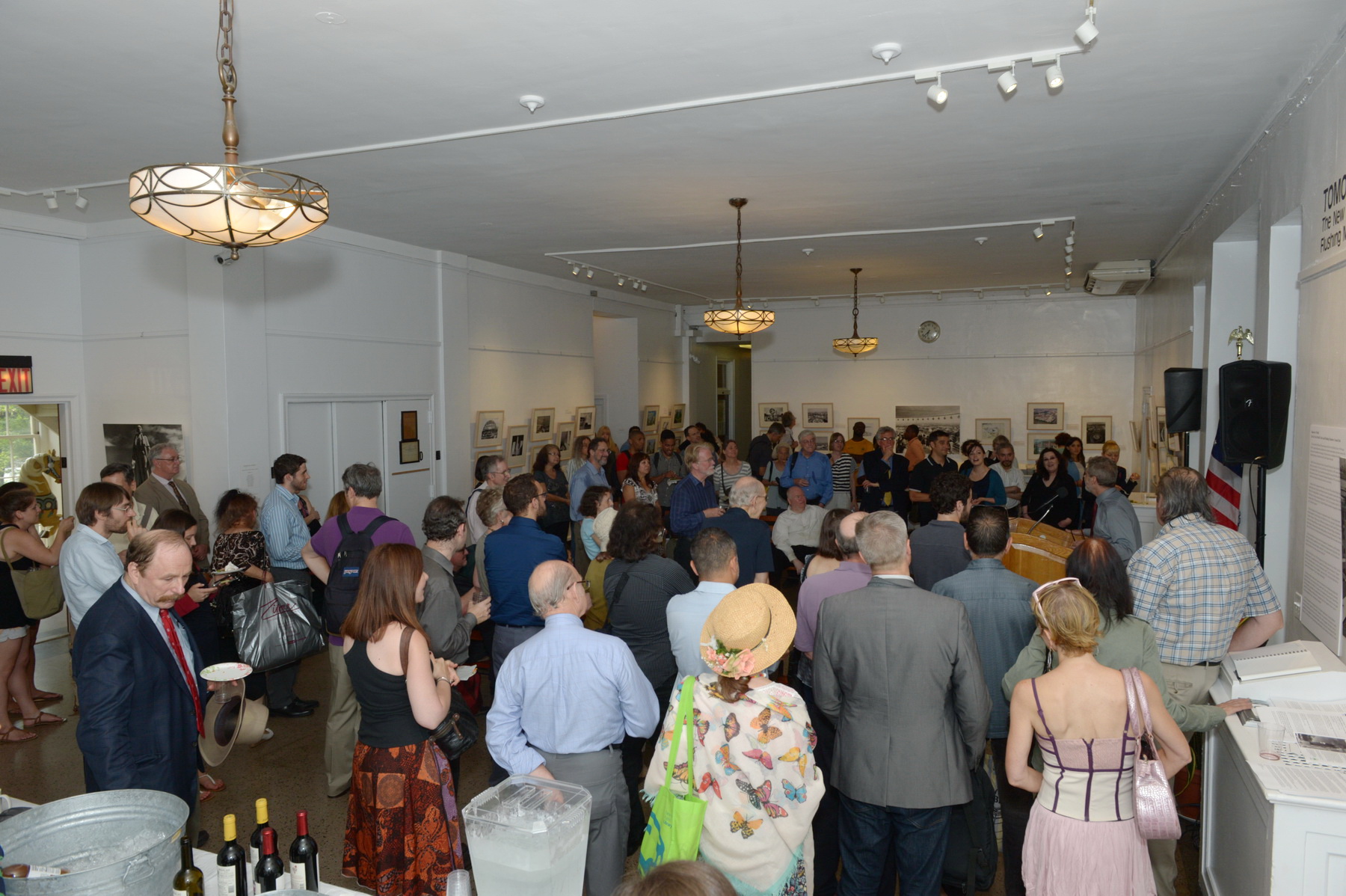 In his remarks, he recalled a moment in 1994 when, thanks to the Park, “I almost literally sat on top of the world. During a cleaning contract, I had the opportunity to climb to the top of a scaffold, and then hoist myself up and sit on top of the Unisphere. We don’t encourage people to try this.”

The show runs from June 26 to August 27, 2014, and is open Monday through Friday 9:00 a.m. to 5:00 p.m. The Arsenal is just inside Central Park, off Fifth Avenue at East 64th Street; the gallery is on the third floor. If you can’t sneak off for a couple of hours on a work-day, you still have two opportunities to see it in the evening, when the Arsenal  will host two lectures – click here for details. Failing that, next best thing is the virtual tour available on the Parks Department’s web site. Be sure to scroll down to the bottom of the page to see photos from both fairs, and a virtual tour of the exhibit – a map with pop-up videos about the surviving Fair structures in Flushing Meadows Park today.