The Chrysler Building, the Waldorf-Astoria, Rockefeller Center– what would New York be without its great Art Deco monuments? These and hundreds of others built in the 1920s and ‘30s helped create the image of New York City as the world’s Modern Metropolis. In New York, the Art Deco style evolved through a series of Manhattan skyscrapers into the city’s chief architectural language. Following a massive reawakening of interest in them during the 1970s, New York’s Deco buildings today survive as prized remnants of a distant yet modern past that still help define the city’s visual identity. 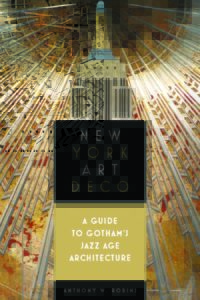 Watch the book talk at the Skyscraper Museum:

What is Art Deco?

Art Deco is one of those movements (like the Gothic or the Baroque) named long after its demise.

In the 1920s and ’30s, architects spoke simply of “modern” architecture, or else of the French “Style Moderne” (shortened to “Moderne”). A variant, familiar in post offices and other federally-sponsored buildings, was the “Modern Classic,” a stripped down, streamlined version of traditional classical design.

But there was no “Art Deco” until 1966, when the curators of a retrospective exhibit in Paris, looking at the various art movements of the 1920s, coined the phrase as a shortening of “Exposition Internationale des Arts Decoratifs et Industriels Modernes (International Exposition of Modern Decorative and Industrial Arts),” the name of the famous 1925 Paris expo of all things contemporary (the U.S. didn’t participate, it is said, because someone here decided that we didn’t have anything modern). In 1968, Bevis Hillier picked up on the name in his writings about French furnishings, and by the early ’70s “Art Deco” was firmly established.

Today Art Deco covers all the various architectural products of the period stretching roughly from the mid-1920s to the late-1940s and even the early 1950s, as long as they incorporate some version of abstract geometry or stylized floral patterns or streamline curves. Historian David Gebhard has drawn up distinctions among the movements: Art Deco for the decorative 1920s, Streamlined Moderne for the curving corners of the 1930s, and so on. Be that as it may, Art Deco is now the catch-all for the whole ball of wax — anything from saltcellars to skyscrapers, produced anywhere in the world during the early decades of this century, using abstract, stylized floral, geometric, or streamlined design.